The National Gallery of Art in Washington DC  recently hosted the UCLA Festival of Preservation film series. Among the restored films presented on Sunday, August 14, 2011 were episodes of This Is Your Life, featuring the life stories of three Holocaust survivors, Hanna Kohner, Ilsa Stanley, and Sara Veffer.

Joanna Raczynska, from the National Gallery of Art Department of Film Programs, provided an overview of the programs and introduced Julie Kohner, founder of  Voices of the Generations.  Julie presented introductory remarks, and led a discussion afterwards. Among the questions raised, was one by a member of the audience who wanted to know how the sponsor of This Is Your Life agreed to support a television program on such a topic, eight years after the end of the war.  This is a question that deserves an answer, as even in our time of open media, questions are asked as to what is appropriate or not.

Photo above is from This Is Your Life, Sara Veffer.  Mrs. Veffer is shown sitting center. 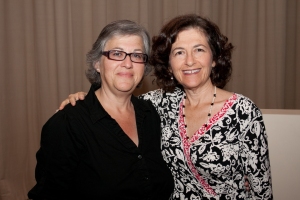 Julie had the pleasure to meet Carolynne Veffer, visiting from Toronto, Canada, and granddaughter of Sara Veffer, one of the three subjects of the “This Is Your Life” programs featuring Holocaust Survivors.

Special thanks to the National Gallery of Art, Washington DC for hosting this event, and to the Ralph & Barbara Edwards Family Foundation and UCLA Film and TV Archive for making this travel possible.